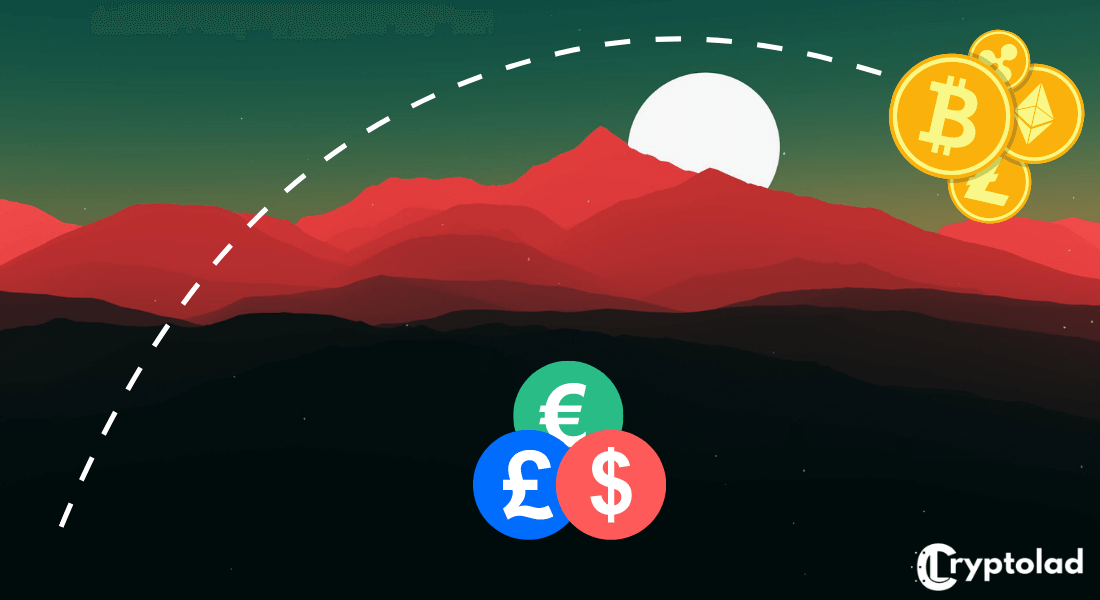 Fiat currencies, more commonly known as 'government regulated currencies' have long been the primary method of transferring value between one another, maybe too long...

Here are the 5 main reasons why cryptocurrencies are replacing fiat currencies:

Let's take a look at the global crypto-adoption rates and analyze our findings...

You know the internet, right? The little thing that 4.66 billion people are using every single day?

To refresh your memory, the internet was born in 1993. 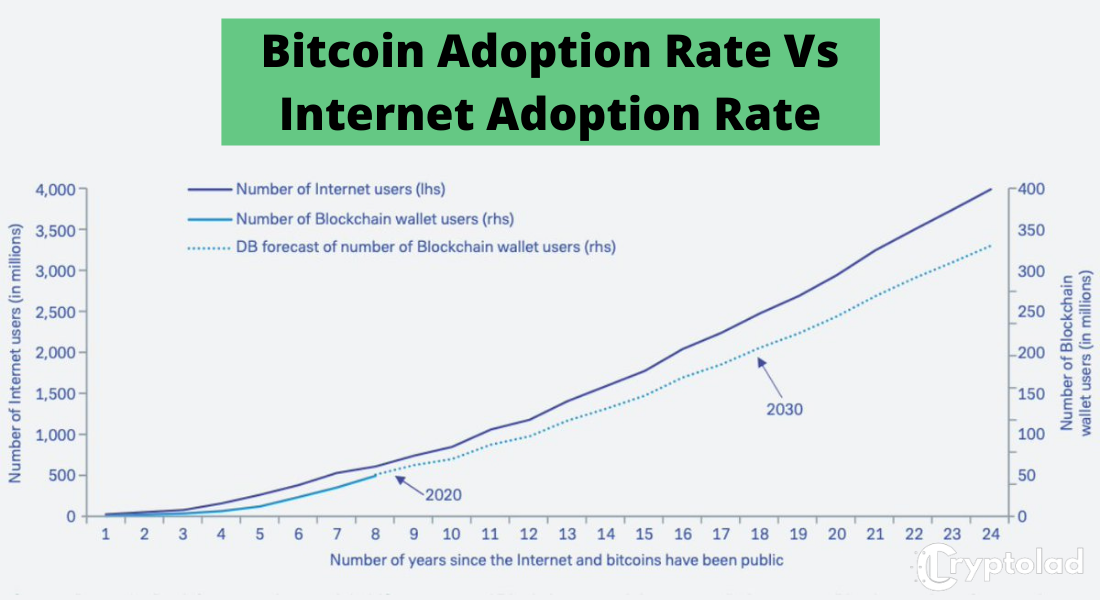 Now let's take a look at the overall cryptocurrency market cap over the last 3 years. 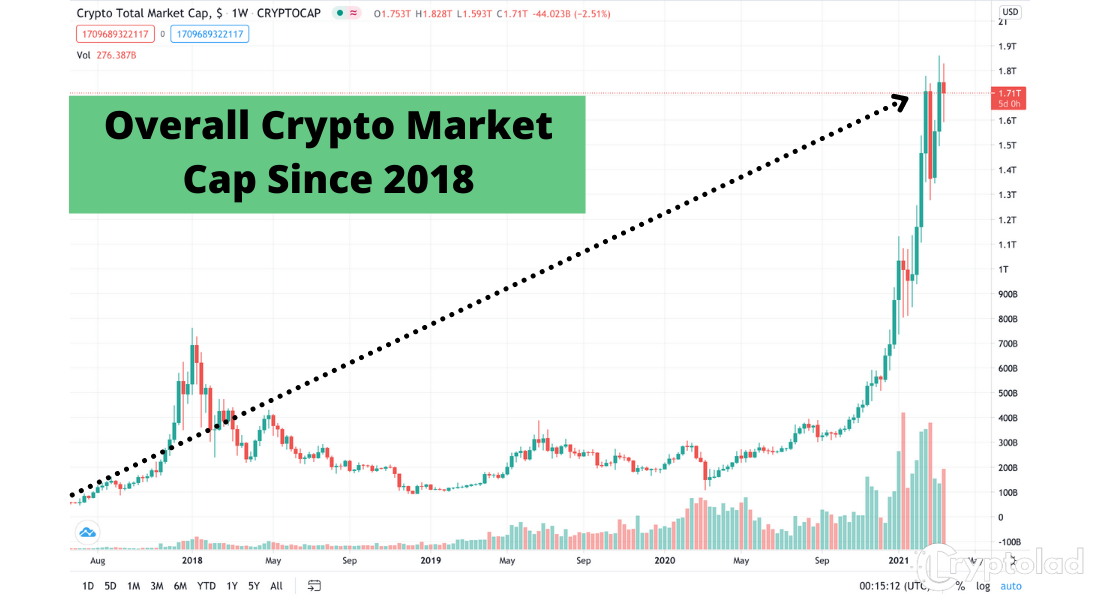 In August 2018, the overall cryptocurrency market cap was sitting around $200 billion.

Dan Held, current growth lead at Kraken and one of the leading names in crypto and blockchain, released this graph of Bitcoins adoption trajectory late last year.

Now that you've seen the numbers let's see why the world is beginning to adopt cryptocurrency on such a massive scale.

Why Cryptocurrency is Replacing Fiat

In 2008, the world was introduced to the now-famous 'Bitcoin' and would become the world's first decentralized currency running on a 'blockchain.'

Fast forward a few years, Bitcoin and blockchain's possibilities are being recognized, more and more cryptocurrencies begin to enter the market.

We've accepted that the value of this currency will decrease over time due to inflation. We've also accepted that every time we exchange 'our' money between parties, we are forced to pay a fee to a third party with nothing to do with the exchange.

Not only do cryptocurrencies store and hold value, but they also increase in value due to the finite amount put into circulation.

Fiat currency, more commonly known as government centralized money, had been a traditional staple for as long as one can remember.

The convenience and availability of fiat money had remained incomparable for quite some time.

However, as the world modernized, individuals looked forward to the digital form of money due to its various benefits.

To date, cryptocurrencies have been on-trend throughout the world by attracting more people day by day.

According to many modern economists, cryptocurrency might prove to be a well-rounded replacement for the outdated fiat currency!

In addition to that, more forms of cryptocurrency are launching in the market, making them easily accessible to the world.

In this battle of the currencies, how does cryptocurrency out-perform traditional fiat currencies?

So far, we've established that fiat is a government-controlled currency with the sole purpose of transferring value between each other.

Now let's take a look at how cryptocurrencies compare.

A major advantage of cryptocurrency is the power of decentralization,  ensuring that a single entity does not get to exercise full control over the platform.

Nowadays, most people are well aware that a faulty managerial body or policy-making body can hugely affect the world by imposing bad decisions.

This realization leads a majority of the world to look forward to decentralized systems.

Whether it’s an office or currency, people always want to refrain from being controlled! Cryptocurrency fits right into that theory.

Moreover, fiat currencies are supervised not only by the banking systems but also by the government.

Thus, cryptocurrency distributes the power equally between everyone involved, not just a small percentage of the population.

Ever wondered why you need a third party to approve you using your own funds? This seems to slow the process down and seems completely unnecessary.

Well, it is unnecessary.

Cryptocurrencies oblige only two parties to be involved in a transaction, between whom the transaction is supposed to occur. It ensures a safe and private transaction without the intrusion of any third parties.

International transactions with fiat currencies can be a pretty complicated process that takes days to process.

Making international transactions via cryptocurrency usually takes a few minutes and is as simple as selecting a receiving address and hitting send.

It's not hard to see the advantage in this situation.

However, due to the decentralized nature of cryptocurrencies, you cannot get them back once you send funds to an address.

So make sure you're sending the funds to the correct address!

The time value of money has long been a discussed topic among economists and, its effect on fiat money is also well-known.

Inflation drives the value of money to decrease over time, resulting in higher prices for the same old goods.

The rapid fluctuation of inflation levels has been a threat to many countries, with improper management and leaders.

One bad policy and the inflation level may spike, resulting in an unstable economy.

With that being said, even though inflation does affect cryptocurrencies, it is of a small percentage.

Fiat money is heavily influenced by inflation, which makes the currency very vulnerable to changes.

This is where cryptocurrency holds a massive advantage- inflation has little to no impact on it.

Cryptocurrency can provide a much more stable economy.

Zimbabwe and Venezuela are examples of countries that have relied upon cryptocurrency to stabilize their fluctuating economy after their governments failed to keep the hyperinflation under control.

In addition to all the advantages listed above, cryptocurrencies are borderless and global!

Due to the decentralized characteristic of cryptocurrency, it may be used in any corner of the world without converting, unlike traditional fiat money.

Cryptocurrency has been a trending topic for almost a decade now and is gradually replacing fiat currency.

Even though fiat money has existed for a long time and is the traditional form of currency, it has limited benefits and resources.

Cryptocurrency, however, seems to solves many of the problems encountered by fiat currencies.

The concept of decentralized-digitalized currency may still be new, but the rate at which cryptocurrency is evolving is starting to turn a few heads around the world.

In which year do you think crypto will officially overtake fiat?

Let us know below...