The UK Financial Conduct Authority (FCA) reportedly ignored consultation regarding its recent ban on cryptocurrency derivatives trading for retail. In a new policy statement the regulatory agency issued, we see that the FCA ignored 97% of the consultatory advice. The respondents listed several arguments that opposed the need for the recent ban.

Notably, the respondents argue that cryptoassets have intrinsic value and that retail consumers are capable of valuing them. Moreover, they claim that the ban was disproportionate and that ‘other measures could achieve our objectives.’ Another important remark was that the agency did not accurately represent the costs and benefits of banning cryptocurrency derivatives for retail traders and investors.

The FCA states that 527 of the respondents came from various stakeholders, with most of them having a cryptocurrency or blockchain background. These include firms that sell crypto derivatives, ETNs, exchanges, trade bodies, law associations, National Competent Authorities, and individuals with academic and professional backgrounds. 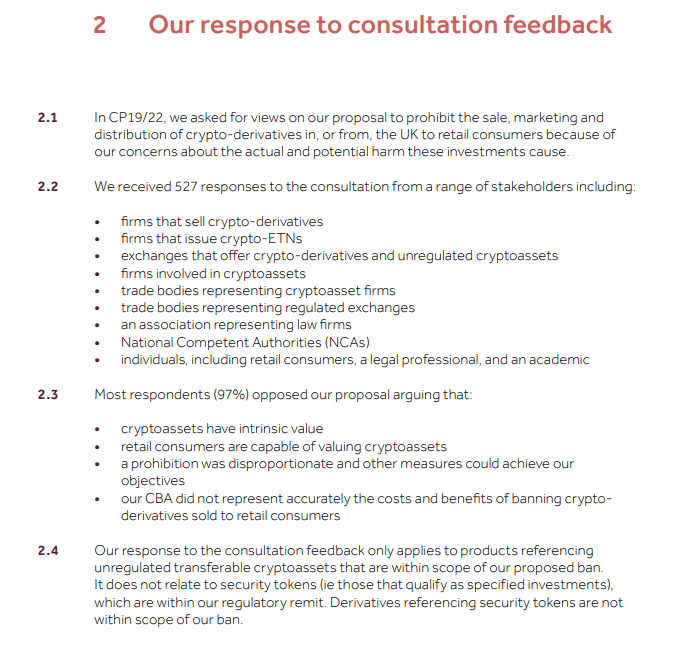 Crypto skeptic David Gerard revealed a different view on his ‘Attack of the 50 Foot Blockchain’ blog. In this, the author states that the ban is a perfect example of how ‘crypto derivatives peddlers think they could spam the process.’ While most of the respondents were from blockchain and crypto backgrounds, Gerard believes it was out of place for non-crypto respondents to not be included.

Another article claims that the FCA intentionally manipulated the data they represented. On buyshares.co.uk, an author writes that the time periods the regulatory agency included resulted in the ban appearing more attractive. The report focuses on the period between April 2018 and December 2019 when most crypto-ETN traders lost their money. At the same time, the FCA refused to include the profitable outcomes between June 2015 and April 2019.

Apart from concluding that the data is indeed manipulated, crypto researcher Justinas Baltrusaitis also realized that the ban may be politically motivated. The author claims that the ban would result in the FCA having no responsibilities regarding cryptocurrencies. Despite having an opportunity to create a long-term strategy that will protect not only investors but the blockchain industry as a whole the FCA decided to simply issue a ban, writes Baltrusaitis.

Indeed, some experts recognize that the recent regulatory pressure on digital assets may have nothing to do with protecting investors. Trading opportunities such as derivatives are available for several years and have rarely been under regulatory pressure. In 2020, multiple regulatory agencies such as the SEC, CFTC, and FCA decided to issue court orders and bans. Interestingly enough, the timing of these orders perfectly coincides with a time when regulatory agencies historically had to reveal their yearly performance.

But even if that was not the case, it became more and more apparent that governments may decide to sweep cryptocurrencies away while introducing their own digital currencies. Lately, a number of leading global economies such as the EU and China revealed their renewed blockchain strategy. In most of their reports, the two political entities pushed the narrative that digital currencies are nothing like cryptocurrencies. These statements imply that legacy institutions seek to distance themselves from the disruptive sector.