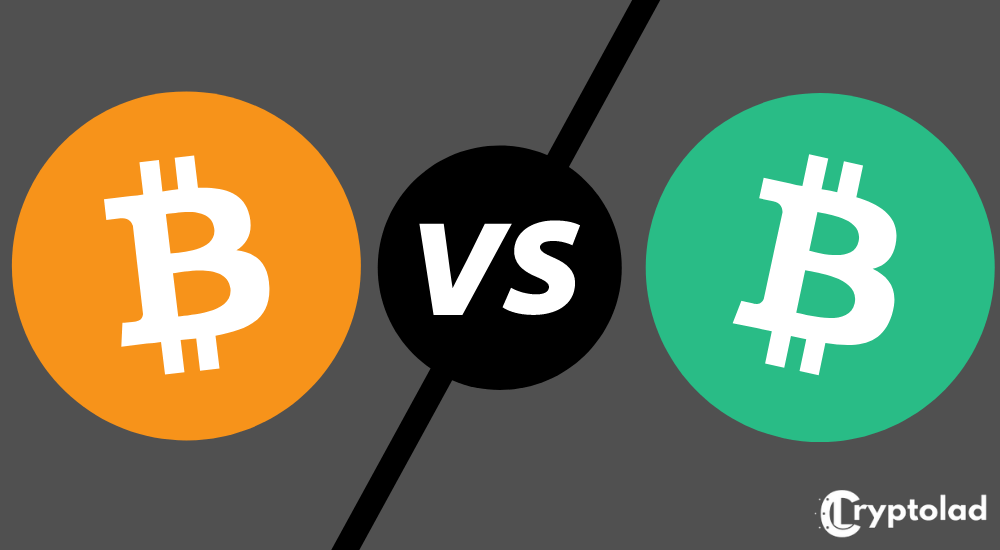 The crypto community can be quite tribalistic at times.

Coin tribes from different sides rarely reach across the divide.

Sometimes these differences of opinion can lead to chain splits as these tribes strive to find their way.

One of the most prominent examples of this is Bitcoin Cash.

The most well-known Bitcoin fork that has been trying to forge its path and identity.

Bitcoin Cash's beginnings can be traced back to a conference in New York in early 2017 and consensus in that year many Titans in the Bitcoin community came together to agree on a scaling solution for Bitcoin.

Scaling Bitcoin was as challenging back then as it is now. Network speeds were slow and fees were climbing.

The solution was to use something called Segwit2x that could make the block size limits rise.

This is an important point because the block size limit was the issue that led to the Bitcoin Cash split.

Let's have a look at the concept of Bitcoin by looking at Bitcoin vs. Bitcoin Cash.

The main point of contention that the Bitcoin cash folks had and still do have with Bitcoin is it can’t be used as a medium of exchange.

They claim that it is far from the routes of peer-to-peer electronic cash that was envisioned by Satoshi Nakamoto.

You cannot conduct commerce with transactions that take over 30 minutes to process with equally high fees.

However, Bitcoin had become unwieldy during times of network bloat, these limitations seemed to become acute.

When you increase block size on the network, you’re also increasing the size of the blockchain in its entirety.

This means you’re making it that much harder for average Bitcoin community members to run their nodes.

Already the Bitcoin blockchain is pretty large at over 242 gigs at a recent count. When first setting up a full node, it can take hours to initially sync.

If you have larger blocks that mean much more data and given that blocks are added constantly, the blockchain size increases at a rate eight times faster assuming the case of an 8-megabyte block.

There could come a stage where members will choose not to run a node because of these limitations.

Bitcoin has a standard block size and it's 1 MB maximum. Bitcoin Cash has power blocks and has an 8 MB maximum.

Bitcoin uses a Segwit by which transaction signatures can be discarded from the blockchain.

While Bitcoin Cash uses the Secure Sigs where all transaction signatures must be validated and secure on the blockchain.

Bitcoin's scaling plans are off-chain payment channels whereas Bitcoin cash is a scaling plan which are on-chain transactions and by which market-driven block size increases.

Bitcoin has decentralized ten thousand nodes across the world while Bitcoin Cash has one thousand and two hundred nodes that are on a centralized platform.

This means only large mining farms and companies can un the nodes which mean more centralization.

Moreover, as most in the crypto community know, centralization is not good.

Another argument that is seen to be made against larger blocks is that it could adversely affect the fee market.

The transaction fees are a free market where users are competing to be included in the next block.

Miners earn fees and they earn those block rewards.

As we know, Bitcoin block rewards are constantly getting smaller, eventually, there will come a time where this block reward will be too small to incentivize the miners, and the only thing they have left to earn are those transaction fees.

However, if the transaction fees are too low, they're not going to want to compete.

They are not going to hash the network past a certain point which will mean a reduction in the underlying security of the chain.

Bitcoin cash network has been live for almost three years which provides lots of data and information to work with.

People are still using Bitcoins extensively even though there may be slower transaction investors there.

Although Bitcoin miners are known to use the Bitcoin Cash network, the unique difficulty adjustment algorithm means they go back to using the main Bitcoin chain again.

So, on a pure comparison basis, Bitcoin Cash is cheaper and faster to send. It has wide exchange support and is backed by some powerful people in crypto.

An enthusiastic community is also actively trying to increase its adoption among merchants.

Despite all of these, it's still nowhere near as popular as Bitcoin.

Why is Bitcoin more popular than Bitcoin Cash?

Despite many of Bitcoin cash's advantages, it's not Bitcoin.

There's no denying that the investors from both the retail side and institutional side prefer Bitcoin over Bitcoin Cash.

People do not watch or follow Bitcoin Cash as attentively as they follow Bitcoin, though Bitcoin cash gets coverage and can get its message out.

Even though Bitcoin Cash aligns with peer-to-peer digital cash, users still view Bitcoin as the Golden standard. Bitcoin cash was mainly forked because they were not sure whether Bitcoin can scale or not.

On the core protocol, there's not been any development that could scale Bitcoin.

However, one of the most promising solutions to this is the off-chain scaling through the likes of the lightning network.

It's a separate payment channel where users can settle Bitcoin transactions almost instantly with zero fees.

These payments are then reconciled or closed on the main Bitcoin blockchain later on.

Bitcoin cash is one of those cryptos that some love and others love to hate. Moreover, Bitcoin cash is proving to be a more useful medium of exchange.

One cannot deny the grand idea of crypto always seems to steal the limelight. In the end, whether Bitcoin cash can forge a path for itself depends on whether Bitcoin fails to scale!

We hope this Bitcoin vs. Bitcoin Cash analysis will help you learn more about these cryptocurrencies.